Walz and Flanagan – Our Best Bet

My endorsement of Tim Walz for governor certainly comes as no surprise. Ever since he was first elected to Congress, his sense of pragmatic leadership and healthy independence has been impressive. 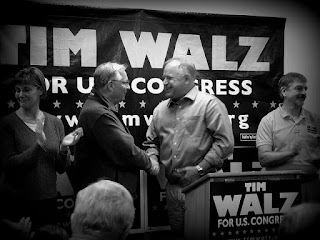 Coming from Mankato gives him a unique insight into non-metro Minnesota and should allow for a more workable relationship with legislative Republicans. Simply put, this public feud and gridlock must end.

The Johnson – Walz campaign was a model in polite discourse that allowed for a sensible airing of the differences between the two parties. There is no reason why that same sense of decency cannot prevail during the next legislative session.

What should not be forgotten in a Walz-Flanagan administration is the necessity of governing from the middle. Most Minnesotans tend to mix progressive values on the social issues with financial prudence and they expect pragmatic leadership from the Governor’s office. Every issue discussed in this campaign is doable from expansion of affordable health care to quality educational opportunity for all. Leadership is the difference. Tim Walz and Peggy Flanagan are the best suited.

Dean Phillips…Following in the Steps of Mondale

Yesterday (October 23), Walter Mondale, Dean Phillips and I participated in a discussion before, during, and after an advertising shoot. Aside from being engaging, it was also reassuring.

When people get older and beyond the pressures of employment, there is a focus on the younger generation. Can they handle the compelling challenges that confront our society or are they self absorbed and centered on satisfying today at the expense of tomorrow?

As our discussions went on, it became increasingly apparent that Dean Phillips is following in Walter Mondale’s footsteps. He is immensely grateful for being adopted into the Phillips family. So much so, that his commitment to serving others has become his life’s mission. All too often, politicians will respond to an inquiry with a political response that suggests too much self-interest. That is not the case with Dean Phillips. His first instinct is the wellbeing of others. That was always the hallmark of Walter Mondale. They both have a sense of decency that separates them from the norms of politics and it is most refreshing.

I remember serving in the Army and, like thousands of other soldiers, evaluating sergeants and officers on the basis of how they would lead in combat. Instinctively, you separated those who would likely be protective of their troops as opposed to those who were more inclined toward self-preservation.

That is a distinction we should make in selecting our candidates and leaders. The acid test is whose interest will they put first?

This is not just a philosophical question.  It is very real. The fact is that if the Republicans control Congress next year, Social Security, Medicare, and health care will all be on the chopping block. That is already in the Republican budgets in both houses of Congress.
Dean Phillips, like Walter Mondale before him, knows the importance of this moment in our history. Is it ethical to reduce life’s most essential services for those heading into retirement in order to pay for a tax cut for the affluent?

Who do you think will protect you…Dean Phillips or Erik Paulsen?

My choice is clear…Dean Phillips.

Mark Rosen…Thanks for the Memories

So much of the Minnesota character has been defined by our media stars. For me it was the creative tandem of Charlie Boone and Roger Erickson of WCCO Radio. They not only understood us but they had that unique ability to make us laugh at ourselves and they did it in a kind & humorous way.

But there were others who somehow managed to be more Minnesota than others. One such personality is Mark Rosen who announced his upcoming retirement as sports anchor at WCCO-TV. Yes, he knew sports, was always well prepared and demonstrated an unusual versatility. But that is not what makes Rosen special. Somehow, he came across as authentic Minnesota. He was always one of us and never pretended to be anything else. He was the kid from St. Louis Park who made good. Hard work, long hours, a stressful schedule may have been the reality but what we saw was a relaxed, warm, well-informed sportscaster who loved Minnesota sports and the personalities who made it all come alive. I always felt that when my beloved Gophers lost, Rosen was equally saddened and personally shared in that loss. When he celebrated a World Series win and interviewed Kirby Puckett we were there. He made us part of the experience and for that he will always be our beloved Mark Rosen.

How well I remember a childhood episode involving my older brother, Sten, and his acquisition of a new toy. He was bright, mentally quick, with a healthy dose of Dennis the Menace.

One day, he came home with a new toy. My mother inquired into how this came about. “Oh, I found it”, Sten responded.  When pressed for more details, he offered, “ It was on the sidewalk.”

Well, Mama was no fool. She knew that new toys did not simply lie on the sidewalks of the Bronx during the Depression so she insisted that Sten take her to the site. It was a bit of a walk but they came to a building with a fenced-in yard that was adjacent to the sidewalk. My brother pointed to the spot hoping that this would end the inquiry. No such luck. Mama pressed on and finally came upon the truth.

Yes, the toy was found on the sidewalk. But that was only after my brother had obtained a long stick, put it through the chain-linked fence and flipped the toy resting on the grass in the yard over the fence and onto the sidewalk.

That appears to be where we are today relative to the Kavanaugh probe. As I write this blog, the White House is announcing its willingness to expand the FBI probe and allow it to interview anyone they want “within reason”.  This means that the scope and thoroughness remain unclear. That ought not to be the case.  Our core principles as a nation are bound in our pledge to “tell the truth, the whole truth, and nothing but the truth.” Why is this the standard in court for a traffic violation but not applicable when it involves the seating of a Justice to the Supreme Court? Why is it that all too often standards are weakened or compromised when it comes to judging those with power?

No, anything short of a complete, independent professional investigation is unacceptable. Why?
1-At least three women have come forth and publicly accused Kavanaugh of serious sexual misconduct. Thus it cannot be a “he said, she said” but rather a “ he said, they said”.

2- These women have publicly called for a full independent and professional investigation. Kavanaugh has refused. Further, Dr. Ford has taken a polygraph test and passed.

3-Not one Republican Senator showed the slightest interest in pressing Kavanaugh on his drinking, his yearbook entries, nor his refusal to welcome a full investigation or a polygraph test.

In order for this nation to restore its credibility and faith in its governing institutions, we must insist on a complete FBI review reflecting their highest standards free from partisan control.

Mama understood integrity and pursued it. Our leaders must do no less.

Writers note: Sten, who has passed on, was a wonderful older brother who was protective and opened up doors of opportunity. He attended Yale on a full scholarship and served in Army Intelligence as a Russia expert. Following this episode, he retired from the toy business.

Letter to the Editor - Star Tribune - On the US Bank Stadium

Some two weeks ago, I sent the below letter to the Editor to Star Tribune.  Since it was not published, I am putting it into the public realm for discussion.

To the Editor,
The Star Tribune (May 30) carried a front-page feature on the financial success of the Super Bowl and the US Bank Stadium. Since the inception of the stadium project, the paper has failed to adequately disclose the enormous financial costs imposed on an overtaxed public and the stunning lack of funding from Zygi Wilf, the wealthy owner of the Vikings. Instead of knowing the details of the finances, the public has been treated to misinformation, secrecy, and the promotion of self-interests. But the bottom line is that the public is paying the bill and it is well over $1 billion.
Since the Star Tribune is directly involved in the ownership of three professional sports teams that depend on public subsidies and since the stadium project commenced with the purchase of  Star Tribune land, it is incumbent upon the paper to hold itself to the same standards of disclosure that it publicly imposes on others.  Further, it is the responsibility of our elected officials to pass “Sunshine Laws” that guarantee the public’s right to know.