As I look back at 2017 and try to determine who gave us courageous and impartial leadership at a time when so many of us were in a state of high anxiety, I would say without hesitation it was the Women’s March. They not only galvanized protestors from all over the nation but they gave the rest of us the most vital ingredient of life – hope. 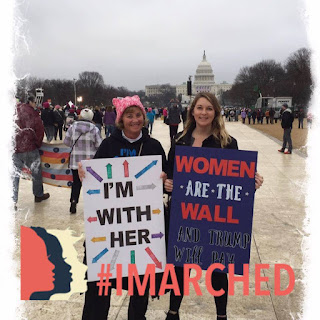 On a personal level, I felt it in our household. Like millions of others, we were in a funk following the election. But when the March was announced, my wife, Susan, instantly declared her determination to go to Washington, ordered her pink headwear, and made plans with our youngest daughter, Jessica. It was clearly a March built out of unwavering fortitude and was organized not by people with titles of leadership but rather by those who had the natural talent and courage. It reminded me of the early stages of the American Revolution when ordinary citizens were so outraged they took to arms without any thought of their personal wellbeing.

And just as the result of 1776 led to our independence, the Women’s March was the force behind the Alabama and Virginia upsets and may well be the power that topples Trumpism in 2018.

Locally, my choice for leader of the year is an old fashioned straight shooter, Richard Painter. Like the organizers of the Women’s March, he has no assigned title of leadership but rather leads and inspires by personal example. As a constitutional scholar, chief ethics attorney during the administration of President George W. Bush, and current Professor of Law at the University of Minnesota, he comes equipped with knowledge but, more importantly, a healthy sense of outrage. And his principle weapon is our Constitution. While all too many Republican leaders hide in the shadows to protect their incumbency, Richard Painter, a Republican moderate, stands forcefully and aggressively against the continuing assaults made on our law by Trump and his allies. Time and again he is the one Republican who through lawsuits, television appearances and social media has risen above the politics of self-interest and reminds us that the majesty of law is what holds our nation together.

In a sense, it is refreshing that those we regard as ordinary citizens are the ones who define leadership for us. It is simply the determination to do right. I applaud, truly applaud, all those who marched in the Women’s March and Richard Painter. It is their intelligent and patriotic resolve that lights our path back to true democratic leadership.

And Justice for All.

Recent events have brought to mind some terrifying days I experienced growing up in the Bronx. As a 6th grader, I was painfully shy with a pronounced stammer.

One day, two uniformed policemen came into the classroom, looked around, and pointed to me while declaring, “We want that boy.”

I was escorted to the principal’s office, planted in a chair, and asked if I knew why I was there. I stammered “no” and was told to stare at the wall clock until my memory improved.

When it became clear that clock watching was not going to produce a confession, I was grilled on my whereabouts for a series of Saturdays. Fortunately, my father had formed a boys club at our church and he would take us to various points of interest in New York City. My Saturdays were covered.

This only produced frustration from the officers so I was directed back to clock watching.

That evening, I shared the horror with my parents who were Swedish immigrants and certainly not acquainted with the finer points of law. So my father wrote down the places and times of the boys club Saturday trips. Certainly, that would clear me they reasoned.

However, the next day I was back again facing the clock. My father’s list meant nothing because the police officers had been informed by a reliable witness that two boys crawled over the school fence, broke into the school, and caused minor damage. One was identified as an Italian and the other had blond hair.

Since there were few blonds in our Italian, Jewish and Irish community then it was clear that it had to be me. Of this the police were certain.

On the afternoon of the second day, Mrs. McCauley, my 6th grade teacher who bore a striking resemblance to Aunt Bee of Mayberry fame, burst into the principal’s office, grabbed me by the hand and boldly declared, “I want my boy back.”

Some time later, the mystery was solved and yes there was more than one blond in the Bronx.

However, the pain of that memory still makes me well up. My presumption of innocence was trampled by the authorities who had certainty of their side and by a principal who was all too willing to vacate her office and her responsibility to protect her students. My parents were poor and all too trusting in authority.

It was my teacher, Mrs. McCauley, who saved me from entering the juvenile system. To her courage, I owe my life.

Being a victim can be painful but the answer to an injustice cannot be to create another injustice.

I am deeply troubled by the resignation of Al Franken and the complete absence of anything resembling due process.

Now reports are surfacing that Leeann Tweeden, Franken’s prime accuser, may have been coached by Roger Stone, a major Trump operator. Since there was no vetting, we only heard her story. But there has been no explanation as to why she attended a USO event in 2009 honoring Franken and was captured on tape joking around with him. This is three years after she claimed to be traumatized by Franken.

She continued in 2011 with a tweet containing a photo of her and Franken together.

This is all very troubling. A rush to judgment is, unfortunately, all too human. But a rush to punishment is totally unacceptable.

Perhaps this is a time for reconsideration. We now know that the right wing attempted to plant a false accusation with the Washington Post.  On the other side, we also know that an accuser against Roy Moore of Alabama fudged the truth in her allegations.

Further, we know that Senate Democrats who asked for Franken’s resignation may have been motivated more by the politics of the Alabama Senate race than the seriousness of the allegations.

And now we have the supreme insult of New York Senator Schumer “advising” Governor Dayton on how to pick a successor. That is a certainty for GOP advertising in 2018.

It is time for all of us to sober up. Our nation is in peril with Donald Trump in the White House and Republicans yielding to his demands. We are increasingly moving towards authoritarianism and continued GOP subservience could possibly lead to the dissolution of the Mueller investigation.

While I am not always in agreement with Senator Al Franken, I firmly believe in due process which is a cornerstone of our democratic way of living. Whenever in history we abandoned it, we severely damaged ourselves. Just think about the lynching of Blacks in the South, the internment of people of Japanese descent in World War II, or the era of McCarthyism when lives were destroyed based solely on allegations.

The simple fact is that Al Franken has been the Senate’s most effective challenge to Trump and his subordinates. The possibility of any rigging by Roger Stone and his associates should cause all of us to call for a rescinding of the Franken resignation and a prompt and thorough review of all allegations by the Senate Ethics Committee.

He was elected by we, the people, and he should continue to serve until a legal determination has been made.
at December 10, 2017 299 comments: